Go directly to the musical THANKSGIVING CARDS at FREDGRAMS.com.

The story of Thanksgiving in America begins with persecuted English Pilgrims headed for New York on the good ship Mayflower but blown off course and landing instead farther north up the Atlantic seaboard at Plymouth, Massachusetts in 1620. 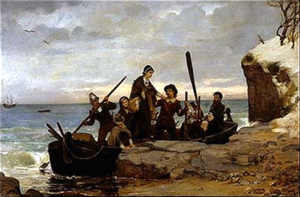 This arrival and its circumstances are agreed-upon, but in these overly politicized times what of significance happened in the ensuing years varies with viewpoint. The story ranges from accusations of violent confrontations between the newcomers and the native Indian population…to the commonly accepted account of struggling Pilgrims being generously tutored by Indians in basic agricultural principles, leading to Indians and Pilgrims sitting harmoniously side by side at a bountiful First Thanksgiving table in the fall of 1621. Both views are true, the overriding fact being that after initial failures and starvation over several seasons of trial and error,   the Pilgrims thrived and gave thanks for a successful harvest in what was ancient customary practice for both American Indians and religious Europeans. 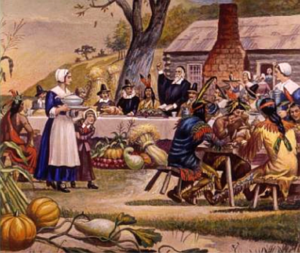 “And God be praised, we had a good increase…. Our harvest being gotten in, our governor sent four men on fowling that so we might after a special manner rejoice together…These things I thought good to let you understand… that you might on our behalf give God thanks who hath dealt so favourably with us.” Early settler Edward Winslow in a letter back to England, 1621.

Winslow’s letter was re-discovered in 1820 and quoted by the Reverend Alexander Young in Chronicles of the Pilgrim Fathers (1841), where parallels between modern and earlier American celebrations of Thanksgiving were emphasized: “This was the first Thanksgiving, the harvest festival of New England. On this occasion they no doubt feasted on the wild turkey as well as venison.”

Rooted in the strict Puritan observance of the Sabbath (not necessarily falling on Saturday or Sunday), a tradition of Thanksgiving in the fall would in time become a commonplace autumn ritual for all New England Yankees…and for the rest of America by the mid-nineteenth century. This coincides with the publication of Longfellow’s hugely popular poem The Courtship of Miles Standish (1848) and rediscovery of Governor William Bradford’s Of Plimoth Plantation in 1855.

By the 1890’s, the story of the Pilgrims’ 1620 Plymouth landing and the First Thanksgiving a year later took root as a fundamental object lesson for American schoolchildren in understanding our country’s unprecedented success as one built on freedom, struggle, persistence, the fruits and considerable pride of ownership, the laws governing all citizens of all creeds, colors, religions and backgrounds.

Calls to make Thanksgiving an official national holiday began with a proclamation from the Continental Congress in 1777 but failed to materialize in any regular observance. The efforts of Sarah Josepha Hale, the editor of a popular women’s magazine, Godey’s Lady’s Book, began in 1827, culminating 4 decades later in 1863 with an earnest petition to President Lincoln, imploring him to bring together a nation rent apart by Civil War with a national holiday of Thanksgiving.

Go directly to the musical THANKSGIVING CARDS at FREDGRAMS.com.